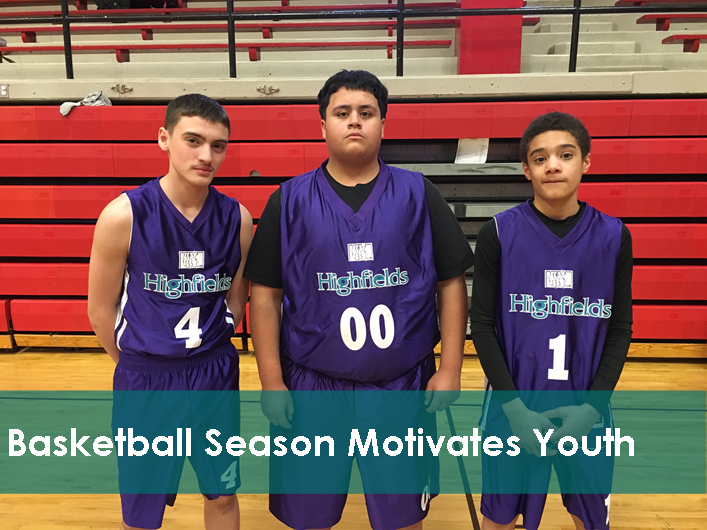 During the 2015 Highfields Annual Golf Outing, many generous Highfields supporters donated to provide new basketball uniforms for the boys to wear this season. In the picture above, three players on Highfields’ team wear the new uniforms before their game at J.W. Sexton High School.

Every year Highfields’ residential students are able to participate in a basketball league as part of the Michigan Alternative Athletic Association. Playing sports is a great way for the students to learn skills like team work, discipline, and dedication. This year, many of the kids who participated had never played organized basketball and it was a new experience for them.

Residential Counselor and Head Basketball Coach Matt Rau said that because so many of the kids were unexperienced, it was a big learning process throughout the season. It taught them a lot about how to work together as a team.

“Although this was all very new for the students, I believe the kids learned what it takes to be a part of a team,” said Matt. “Now many of the kids look forward to playing with their team.”

Playing sports provides a great outlet for the kids because it teaches them to be dedicated to something constructive. Although the season had its up and downs according to Matt, he still believes that most of the kids on the team are finishing the season with a great attitude.

“I believe most of the kids developed more self-control during the season and were able to work on their problem solving techniques,” said Matt.

With a winning record of 7-4, Highfields has one game left to decide whether or not they will be attending the State tournament on March 12th. The team is anxious to play and the players have their hearts set on attending the tournament.

“We’re looking forward to playing a few more games this year!” said Matt. “The kids are very excited about trying to qualify for the tournament.”