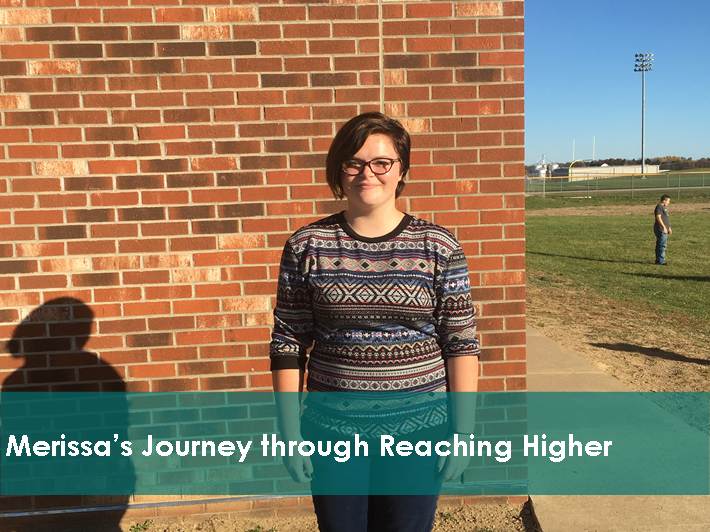 Middle school memories are bittersweet for Merissa. Coming into sixth grade she was having issues adapting to the changes of a new school. Merissa was struggling with low motivation due to depression, her grades were slipping, and she had a lot of anxiety.

However, that all changed once Merissa joined Highfields’ Reaching Higher program.

Merissa is currently a 17 year-old senior at Springport High School, and she is a mentor for the middle school students in Reaching Higher.

When she thinks back to her middle school years, she says it started out rough, but once she began going to Reaching Higher it made a significant impact on her life. She wanted to become a mentor to give back to the program that had given her so much.

“Reaching Higher has changed my life,” said Merissa. “I want to be that person who changes lives for other students.”

Reaching Higher is Highfields’ after school program which focuses on at-risk students. It reinforces the academics students learn throughout the school day and helps to improve behavior in the classroom.

At first, Merissa didn’t want to join Reaching Higher, but her friend urged her to try it.

“I wasn’t doing well in middle school at first,” said Merissa. “My friend told me: ‘You need to come to Reaching Higher. I think it will be good for you because they’ll help you and make sure you have motivation to do things.’”

Merissa knew she needed to make a change in her life because she felt like she was headed down the wrong path.

“I was pushed towards Reaching Higher, but I don’t regret it at all,” she said.

Merissa started going to Reaching Higher in seventh grade.  She initially liked the nice, friendly environment of the staff and the students.  She enjoyed having extra time to get help with her homework. Eventually, her grades started improving and she began to feel more confident.

Merissa also began hanging out with new friends and socializing more with students outside the classroom.

One of the most important things Merissa benefitted from in Reaching Higher was figuring out the plans for her future.  Merissa wants to be a Robotic Engineer and has already been accepted into Lake Superior State University. She said thanks to a Reaching Higher activity, she was able to find her passion and career goal.

“They have a robotics program in Reaching Higher and once I saw the program and started getting my hands on building it, I fell in love with it!” said Merissa. “Building robots became one of my coping teqniques for my depression and anxiety. I wouldn’t have ever figured that out if it wasn’t for Reacher Higher.”

In eighth grade, Merissa became so passionate about Reaching Higher that her teacher told she should be a mentor for other students.  She jumped at the opportunity to give back to the program that gave her so much.

Merissa likes mentoring Reaching Higher students because she sees the changes that occur throughout the years.

“I see kids in Reaching Higher and also in school. Kids that would never talk to each other in school are now mingling and becoming friends,” said Merissa.

Merissa believes that Reaching Higher definitely has an impact on kids even after the program ends.