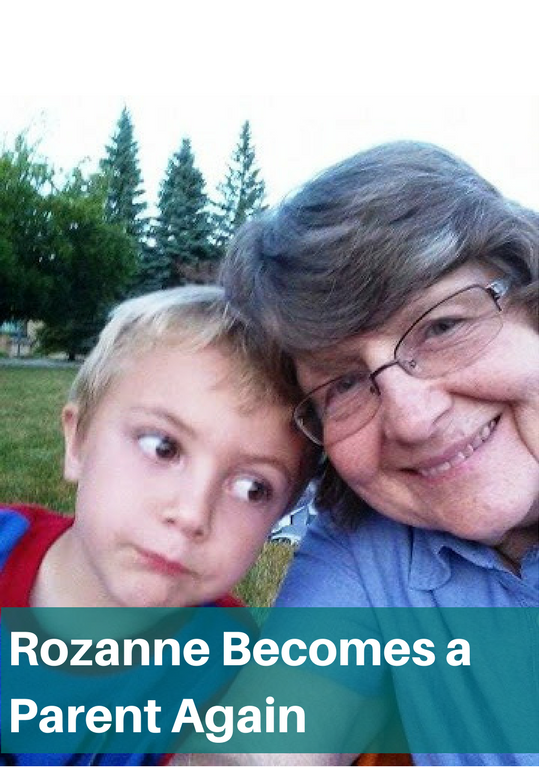 Rozanne and her husband, Mike, didn’t plan on raising their 6-year-old grandson, Jaxxon, but “life blessed us with the opportunity,” she said with a smile.

Rozanne’s daughter raised Jaxxon for eight months in a home nearby; however, she was unable to continue to parent him. Rozanne and Mike saw that Jaxxon needed more support, so they brought him into their home and cared for him from then on.

Jaxxon has light blonde hair and blue eyes, but along with his cute looks, he also has his challenges to overcome. Certain tasks pose challenges such as issues with textures, delays with speech, as well as other sensory issues. Rozanne had him tested for autism, but the doctors felt it was more of an emotional impairment. She was frustrated by the diagnosis, and needed more help.

“What we really needed was an individual who would stick with us, know us, be in our home, understand Jaxxon, and help us understand what we could do,” said Rozanne. “That’s where Highfields came in.”

She was referred to Highfields’ Home-Based therapy program, and received support from Highfields’ therapist, Ruth Vanderpool-Combs.

Ruth is supportive in helping Jaxxon and his family as they face day to day challenges. With his sensory issues, she helps him overcome some of his fears by using sand, art, and play therapy techniques.

Another area of difficulty for Jaxxon is school. His unique needs are more noticeable than many of the children in his classroom. Rozanne was afraid that the teachers wouldn’t know what to do for him. Ruth stepped in again for support, resulting in a team approach with Hillsdale ISD, school staff, clinician and family.

“I went out to his school and modeled ways that I work with him at home,” said Ruth. “I shared tips on what to do if Jaxxon runs away, or how to handle him when intervention is necessary.”

“It’s like day and night,” said Rozanne. “Originally, the classroom environment almost felt hostile. Now the kids are welcoming, and modeling after the teachers. It wasn’t that they didn’t want him there, they just didn’t know how to approach him.”

The support from Highfields, the school, and Rozanne and Mike creates a strong team for Jaxxon. Everyone is coming together, it’s fantastic!” said Rozanne.

Jaxxon has grown in leaps and bounds since working with Ruth. He is playing with other children and sharing toys. He interacts with textures and enjoys painting. He looks forward to bathing and Rozanne is hopeful that swimming will come next. Jaxxon is overall a much happier child.

“With Highfields’ continuing help, I know that Jaxxon is going to be everything that he can be,” said Rozanne.