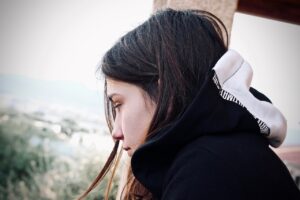 “I want to share my story with others, so that when they read it, they realize they are not alone,” said Jocelynn.

Every story is an iceberg, and what you see on the surface is not even close to the full picture. Sixteen-year-old Jocelynn’s iceberg reached down deeper than anyone had realized, until she started speaking to Highfields’ Home-Based Therapist, Lizette Elgabalawi.

Lizette met with Jocelynn and her mother Rachel for about a year to work through the layers of what Jocelynn was going through. Rachel reflected on how her daughter Jocelynn’s quality of life was different before Lizette and Highfields became involved, saying: “My daughter was a shell of a person. She did not display emotion and constantly isolated herself.”

No one in Jocelynn’s family realized the extent of her pain until Rachel came across a pack of letters that changed everything.

“To really understand where I am at today, I need to begin at the beginning of this story,” said Jocelynn. At the age of 5 and then again at the age of 9, Jocelynn was violated sexually by older male figures. People she trusted, who her parents trusted with their child, violated something that is sacred and told Jocelynn that she would get in trouble if anyone else found out. She was made to feel alone and isolated from everyone. Later, she realized that there were other people who were experiencing the assault as well, and the information eventually came out to her parents and then to the authorities.

In middle school, Jocelynn began experiencing severe anxiety and depression because of her trauma. It was at this point that her family started noticing the differences in her behavior, and began to worry. “I’m so thankful my mom is nosey, if not for her I wouldn’t be here today,” she said. It’s not every day that a teenager thanks her mother for being nosey, but what Rachel found saved her daughter’s life.

Rachel found 3 good bye letters written out to her family. Jocelynn wrote them with the intention of taking her life soon after. Rachel took immediate action and kept Jocelynn safe in a mental health facility.

During that time, Rachel sought help through Highfields.

“It was hard to open up to anybody about what I had experienced … but Lizette made it easier to share what I needed,” said Jocelynn. Jocelynn and Rachel both agreed that Lizette was the perfect person for their situation, that she was an immediate source of trust and confidence as the family worked through the mountain of trauma that they needed to. “Most of my sessions I spent at the other side of the room because the distance made it easier to talk about what I needed to talk about,” said Jocelynn. Jocelynn found the incredible strength to talk about her experiences and Lizette went with the flow for the comfort of the family. Jocelynn and her family have successfully ended their sessions with Lizette and Highfields, and continue to thrive in their daily lives.