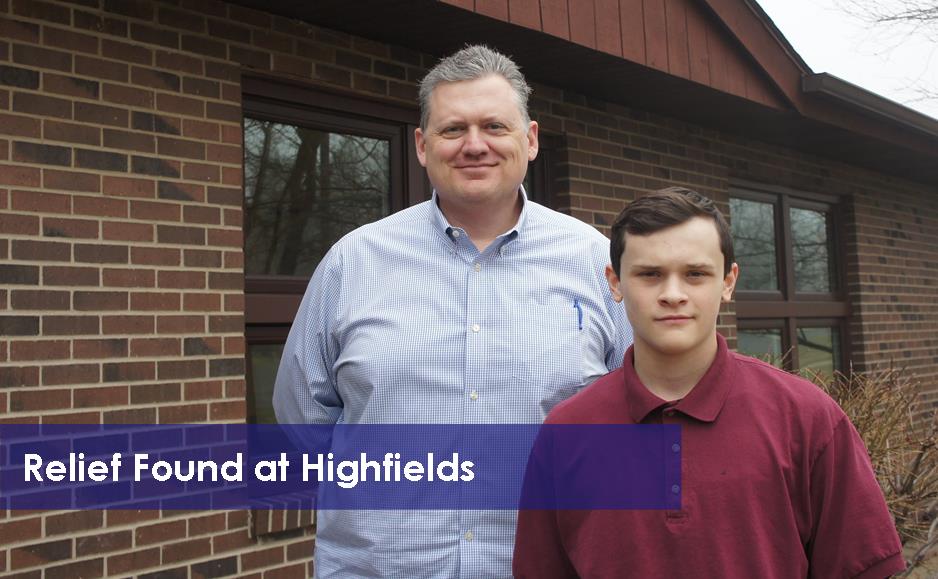 Above, Chris and Noah stand outside the Jean Schultz Center at Highfields' Onondaga Campus.

Noah is a smart young man. He could see that his marijuana use was a big factor in why he got into trouble. He could also see that if he continued his drug use, it would lead to bigger, more devastating consequences.

Noah was placed in Highfields’ Residential Treatment Program this winter. At first, he felt depressed and angry. What Noah didn’t know was that, as the decision of his placement was being made, Highfields was making some critical changes that would greatly help him.

Derek Hitchcock, director of residential services, knew two things to be true: that substance abuse education is important for the residential program; and that they could be doing a better job at it.

“Substance abuse issues are tied to self-esteem,” Derek said. “If they have control over their substance use, they’ll feel more confident. Kids who are more confident will do better in school and better in groups. It can be a catalyst to improved program performance.”

Highfields had been providing substance abuse education through staff and administration – but those people had other primary responsibilities. Derek knew it was time to bring someone on whose sole focus was that education. He began searching and soon, the perfect candidate applied.

“We wanted someone to give enough time and attention to do this properly,” said Derek. “The minute Chris applied, we were all happy because we knew he was a qualified guy.”

Chris Horton worked with Highfields Residential Treatment Program in 2009. He also worked with Derek at the W.J. Maxey Boys Training School. Derek has held him in high regard ever since. Chris has been working with youth with substance abuse disorders for over 10 years. Soon, he will have his master’s degree in clinical social work from Michigan State University.

“I like making connections with the youth that we serve and seeing changes in them, even if it’s gradual or incremental,” Chris said. “I like being able to feel that we’ve played a role to help them along their path.”

Noah is one of Chris’s students in the group he leads every week. Noah says that it is helpful and reaffirms what he has been thinking since he first got into trouble.

“Drugs should not be in your life,” he said. “Drugs could ruin your life.”

Chris employs elements of programs he successfully used in the past, such as The Seven Challenges, an evidence-based program designed for adolescents with substance abuse problems.

“The majority of the students being served have substance abuse issues, mainly through self-medication,” he said. “There’s a strong need to address that and to address that through evidence-based programs. The kids need it and the courts expect it.”

Chris said he has enjoyed coming back to Highfields to work with his former colleagues. For him, Highfields is a place that welcomes its employees and their ideas.

“I’m happy to be back and working with a lot of the same people I worked with in 2009,” he said. “The residential program seems to be going in a good direction and I want to be a part of that. I feel like I’m coming back home.”

As for Noah, he is happy to be a part of a program that will help him in the future. He has been at Highfields and in the Substance Abuse Treatment Group for three months. He says he feels better now that marijuana is out of his life.

“I’m not going to get anywhere by smoking weed,” he said. “It’s a waste of money and it just changed me. Now, I feel more active. I do more things and I socialize better.”