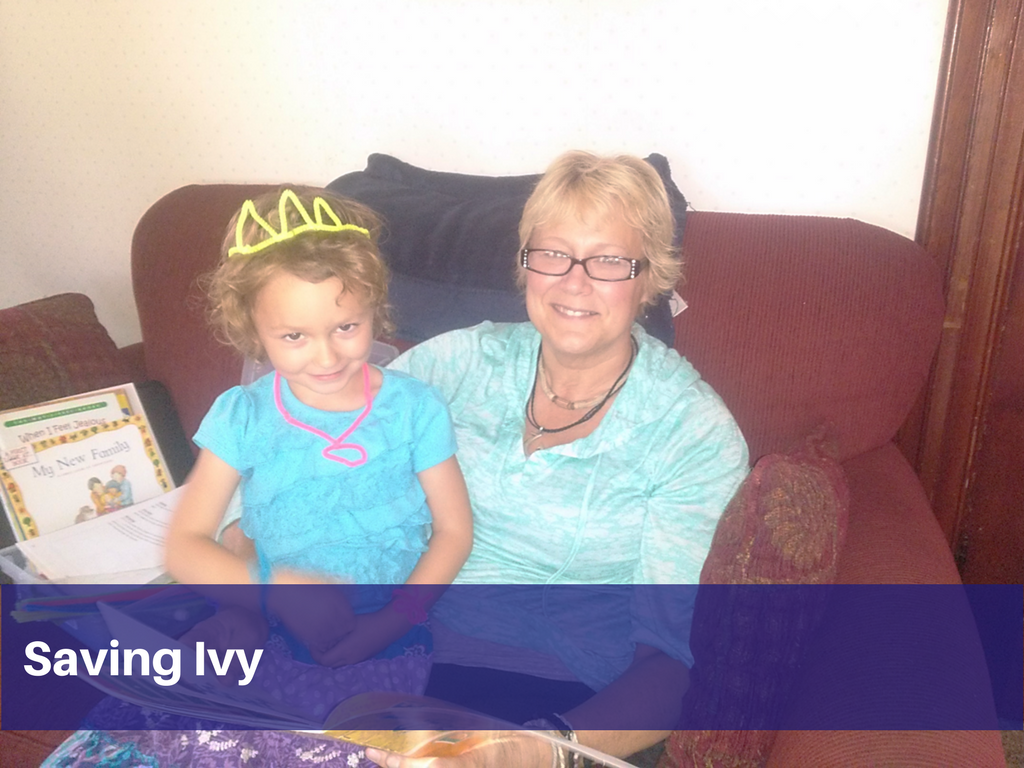 Mary and Sheldon didn’t know what to do when their 4-year-old foster daughter, Ivy, started having nightmares related to her past. Thanks to your support, Highfields’ therapist, Gayla Ignacio, stepped in and knew exactly what to do to help Ivy recover.

Mary and Sheldon Lange met their baby girl Ivy when she was just five weeks old. They were foster parents, and also raising three boys of their own. The foster care agency told them that Ivy wouldn’t stay long, and the goal was to reunify Ivy with her mother.

Mary and Sheldon took care of Ivy for 15 months and celebrated a lot of milestones with her such as her first birthday. During that time, Ivy’s mother completed the necessary steps, and Ivy went back to live with her mom.

A year passed without Ivy, and Mary and Sheldon had another child. Then one day Mary got a call.

“We found out that Ivy had gone back into foster care, and that she has a little sister now named Jenna who has down syndrome,” said Mary.

“Of course we took them back,” said Sheldon. “We began the journey again.”

Ivy’s biological mother and stepdad worked hard to reunify their family, but they fought a lot. After another year of raising Ivy and Jenna, Mary and Sheldon were told again that they were going to be placed back with their birth mother.

A few days after Ivy and Jenna left, Sheldon and Mary got a call that Ivy’s parents had a fight and that the police had been called. Ivy and Jenna came back with the likelihood that they were going to stay.

Ivy was 4 years old at the time and had witnessed her parent’s fighting and the police at her home. She was traumatized by what she had seen.

“When Ivy came back to us she had a lot of nightmares,” said Mary. “She didn’t talk a lot which worried me because I didn’t know what she had seen. She was definitely distressed.”

Mary asked her agency for a referral to get counseling for Ivy and was referred to Highfields. Gayla Ignacio, Highfields’ Home-Based therapist, came over once a week to work with Ivy.

“Having an outside person come in was very helpful because Ivy could talk about things that she might not want to talk to me or Sheldon about,” said Mary.

Gayla used play therapy with Ivy, which is a form of counseling that uses play to communicate with and help people, especially children, prevent or resolve psychosocial issues.

Gayla worked with Ivy using trauma and child-centered play therapy. She helped Ivy process what she’s seen and experienced in her past by reenacting scenes with her, such as the night that the police were called. It has helped Ivy get more comfortable confronting her past.

Gayla also supported Mary and Sheldon throughout the process by teaching Mary how to do play therapy with Ivy.

“Ivy can be a difficult child to handle, so having tools from Gayla about how to approach her with things was very helpful,” said Mary.

“Ivy became more confident and her nightmares are almost non-existent,” said Mary. “It definitely made a difference.”

Mary is grateful that Ivy received personal care and support from Gayla and Highfields.

“I just thought that the tools that Gayla used and the way she used them was all top notch,” said Mary. “We felt lucky and blessed to have her assigned to Ivy’s case.”

Last September, Mary and Sheldon officially adopted Ivy and Jenna into their family. Gayla was invited to the adoption ceremony and she gladly attended to show her support.