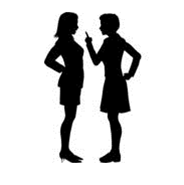 Sandra* and her late husband Dave* were foster parents for 40 years. They have three biological children and three adopted children. Their youngest adopted daughter Rachel* came into their foster care when she was only 10 days old. She was born a drug-addicted baby.

Rachel showed signs of difficulty even as a baby. As an infant, she startled very easily, and would throw her hands up over her face when she heard loud noises. Even the human touch made her frantic, which was a symptom of drug-withdrawal. Rachel had constant tantrums and screamed at unexpected things.

“She was one of the roughest kids we ever took care of,” said Sandra.

When Dave passed away, Sandra and Rachel's relationship changed. As a teenager, Rachel asserted more dominance over Sandra and became abusive toward her. Sandra hid the abuse from her family and friends.

During one argument Sandra had to call the state police. The court system referred them to Multisystemic Therapy (MST) through Highfields. MST is an evidence-based practice designed to help children ages 12-17 who are experiencing multiple problems in their life.

Sandra and Rachel were not responsive to therapy at first.

“They came three times a week and it was just too much. I wanted them to leave us alone,” said Sandra. “They did help, but again, I covered for Rachel.”

Rachel’s behavior did not change. It escalated to the point that Sandra had to call the state police again. Sandra went to the court hearing and saw her Highfields’ counselor, Addie Lanterman, in the hall who worked on her last MST case. Sandra told Addie everything that was going on, so Addie went to bat for the family in the courtroom and asked if she could take their case on a second time. The court approved and Addie began working with Sandra and Rachel again.

“This time it was stressed to me that I had to tell the truth because Rachel knew that I didn’t want to tell on her and she could do what she wanted,” said Sandra. “It was defeating the whole purpose of trying to get help.”

Addie focused on finding ways to de-escalate Rachel when she starts to get angry. She also initiated a support group for Sandra among her family, friends and community members.

“Addie initiating the support group was the most beneficial thing to come from the MST program,” said Sandra. “As a single parent, I need a support system.”

There are twelve people in the support group who share advice with Sandra about how to approach Rachel. Sandra feels protected in the group and when she needs support, they back her up.

Since working with Highfields, Rachel has started to accept Sandra more as her mother, and not just her friend.

“With just the two of us here, we were buddies,” said Sandra. “That’s nice, but still somebody has to be in charge. I had lost that power. She lost respect for me because I kept giving in.”

Now with the right tools from MST and a support group to lean on, Sandra is optimistic about her future with Rachel.

*Names have been changed