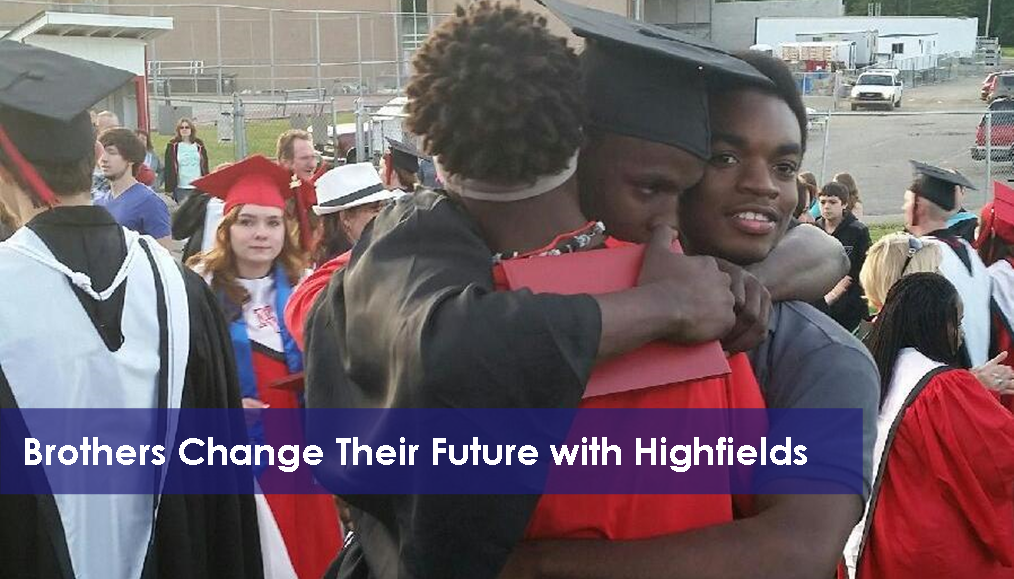 Dijuan and Jimmy grew up rough. That’s how Dijuan puts it. Their mother struggled with a drug addiction – and with staying out of prison. Their grandmother did her best to take care of them and their younger siblings, but it was hard.

Dijuan had lost his older brother when he was seven years old. His brother was 22 and acted as a father figure to him. Losing his brother and seeing his mother repeatedly end up in prison left Dijuan confused – and angry.

“I was a very aggressive person,” Dijuan said. “I used to beat people up. I used to smoke and drink. I was in a gang.”

Home invasion and domestic violence are what lead him to Highfields in the fall of 2013. Jimmy followed a year later. At first, they didn’t like it.

“When I got into my first fight[at Highfields], it just went bad from there,” Dijuan said. “I kept fighting and it became a habit. I just wanted to get out of there.”

But soon, Dijuan saw that he needed to change his habits. He realized that fighting wasn’t going to get him anywhere – or at least not anywhere good. So, he started to focus on change. R. Davis, a residential counselor at Highfields, saw the change in Dijuan take place.

“He realized, he’s not a child anymore,” R. Davis said. “He doesn’t have to be the victim. He can create the future he wants for himself and be the role model for his brothers and sister that he always wanted.”

Dijuan knew that a high school education was the first step toward being successful. When he left Highfields, he began attending Northwest High School in Jackson.

In May, Dijuan did what he set out to do – he walked across the stage on Northwest High School’s football field and collected his high school diploma.

There have been several influences along the way that helped Dijuan stay focused on education, he said.

“It started off with Highfields,” Dijuan said. “There was one person who motivated me to do right. He said I could do better than [what I was doing]. That was Mr. R. Davis.”

Seeing Dijuan graduate from high school left a big impression on Jimmy. Jimmy is still a student at Highfields and looks up to Dijuan.

“I’m proud of him for graduating,” said Jimmy. “After everything that has happened to us, I didn’t think any of us was going to graduate…[Now] I see my brother do it, so I want to do it, too.”

Now that he has graduated, Dijuan plans to attend Lansing Community College to study mechanics or criminal justice. He says he likes to work with cars, but he also thinks he could help kids as a parole officer.

“The staff back at Highfields used to tell me, ‘stop fighting the system,’” he said. “I used to do that all my life. Just fight instead of listen.”

Now, he says he listens and he’s better off for it. He knows that he has set an example for Jimmy and their younger siblings. He wants them to know that they can change, but they have to work hard at it.

“Jimmy has to change himself before he lets anyone else help him,” he said. “If I can do it, [he] can do it.”