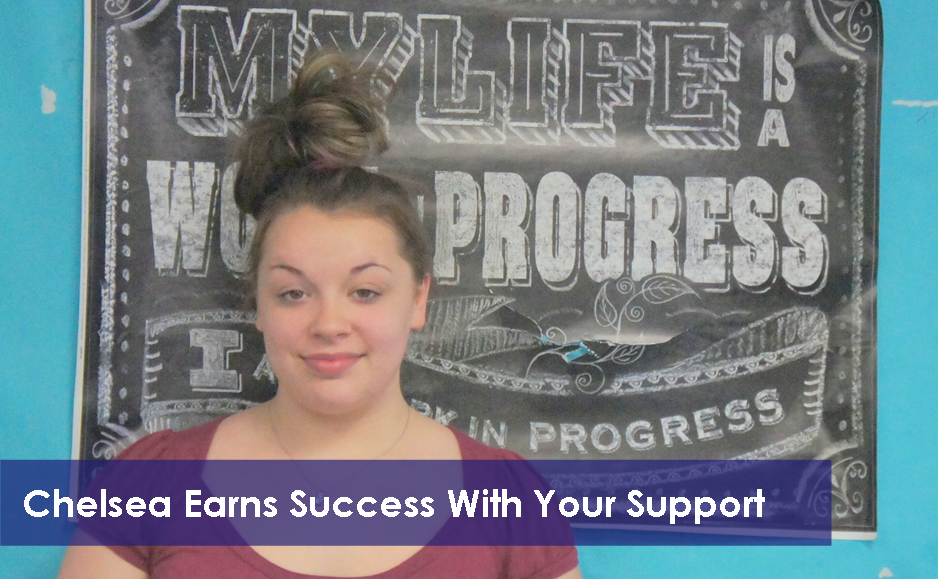 Her home life wasn’t easy. Her parents struggled with heroin addiction and they lost their house. In her first two years at Ingham Academy, she lived in out-of-home residential placements.

“I liked Ingham Academy,” she said. “I felt like it could get me out of residential placements and I became close to the staff.”

She said going to Ingham Academy helped her turn her life around. But not right away.

“When I first started going here, they weren’t sure I would graduate before I was 20,” she said.

Two years after starting at Ingham Academy, at age 16, she became pregnant. A month after her daughter was born, she had emergency surgery to remove her gall bladder. Then her mother relapsed. Things weren’t going well and she said she wasn’t motivated to change.

As a result, her daughter was put in foster care and Chelsea began hanging out with a rough crowd. She ended up arrested and put into foster care herself. At the following permanency hearing for her daughter, the judge warned that her parental rights could be terminated if she ended up in court again.

“That’s when it clicked for me,” Chelsea said. “It made me realize, ‘I don’t have anything going for me. I can’t lose my daughter. I have to turn this around.’”

So, that’s what she did.

Lindsey Robinson, a juvenile court officer at Ingham Academy, said that in the two years she worked with Chelsea, she really matured.

“She has grown to be a helpful, caring and nurturing mother to her daughter as well as to others in need,” Lindsey said. “She once had no drive for success. She is now only accepting success, even with the obstacles she has run into along the way.”

Chelsea knew in order to support herself and her daughter, she needed an education. She made the commitment to study hard and was able to make big strides in a short period of time. Last June, she had 10.25 credits. Just 10 months later, she more than doubled her credits, allowing her to graduate at age 18. She will walk in the graduation ceremony in July, is enrolled in Lansing Community College and works at Arby’s.

“I want to be a home healthcare nurse,” she said. “I plan to find a nice house in a nice neighborhood. I want to do as much as I can and strive for success for my kids.”

Chelsea has worked diligently to build a path for a successful future. She says she is grateful for Lindsey and the other workers who have helped her – they are now like second moms to her. She is also grateful for Ingham Academy and its supporters.

“They really are changing kids’ lives,” she said. “They’re making kids who have nothing, have something. They’re getting kids off the streets and saving kids’ lives.”