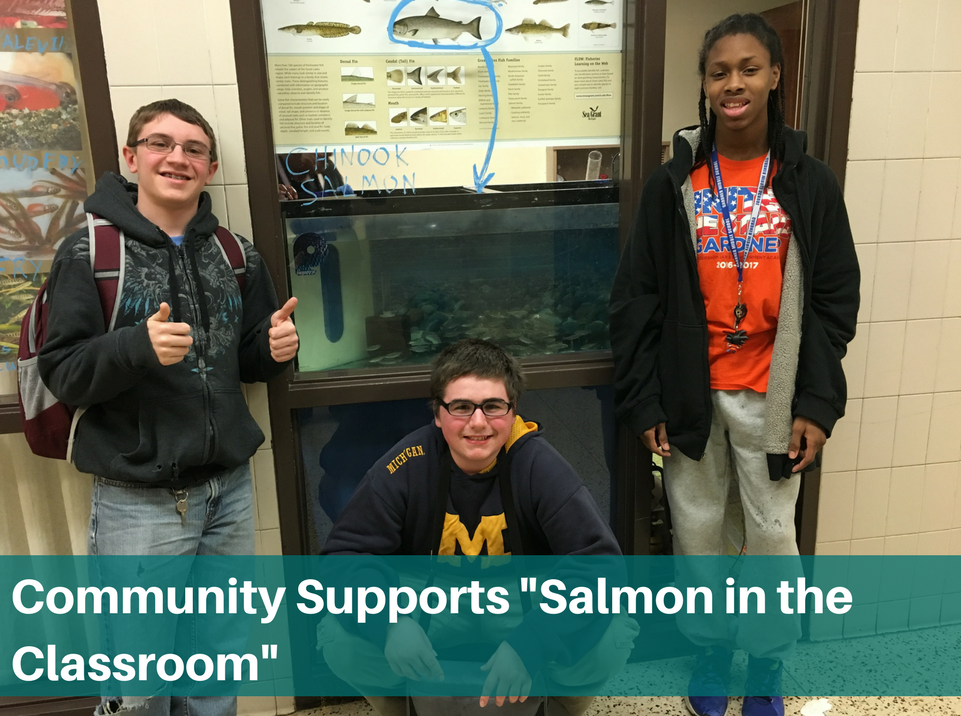 “Salmon in the Classroom” is a program run by the Michigan Department of Natural Resources (DNR) that gives students the opportunity to raise, care for and maintain salmon in their classroom from fall until spring. Students and teachers follow the life cycle of salmon from eggs, to hatchling to smolt (young salmon).

Tackling the “Salmon in the Classroom” project is no easy feat. There is a huge time commitment, as well as extra expenses and aquarium maintenance.

“No one really wanted to take on the project because it’s a big responsibility,” said Todd Wilson, Reaching Higher Teacher, “But I thought doing a partnership with the school, the DNR, and Reaching Higher would be really nice.”

Todd received an overwhelming amount of support from the community. A local school donated a fish tank they weren’t using. Pruess Pets in Lansing also provided generous support throughout the process.

“I can’t say enough great things about Pruess Pets,” said Todd. “They sent people over to help us with questions, set up our equipment, and even donated equipment when ours failed.”

The biggest challenge they faced was maintaining the correct water temperature for the salmon – about 46-52 degrees. There is a chiller that helps regulate the water temperature, but the room temperature was too warm and it was hard for the chiller to keep up.

“We went through 3 chillers which were donated by Pruess Pets,” said Todd. “They helped us come with the idea of putting Styrofoam around the tank to keep the water cool.”

Challenges aside, the students have enjoyed every step of the project. They visit the tank daily to check on the salmons’ progress, feed them, clean the tank, and check the ammonium levels.

“The idea of keeping salmon in a tank was cool but I didn’t know if it would work,” said student Brendin. “Now I think it was an awesome project to do in school.”

The final step is to release the salmon back into a river, which the students will do in April.

“The project was successful, but it wouldn’t have been possible without the support we received,” said Todd. “It was a great way to connect partners in the community with Reaching Higher.”