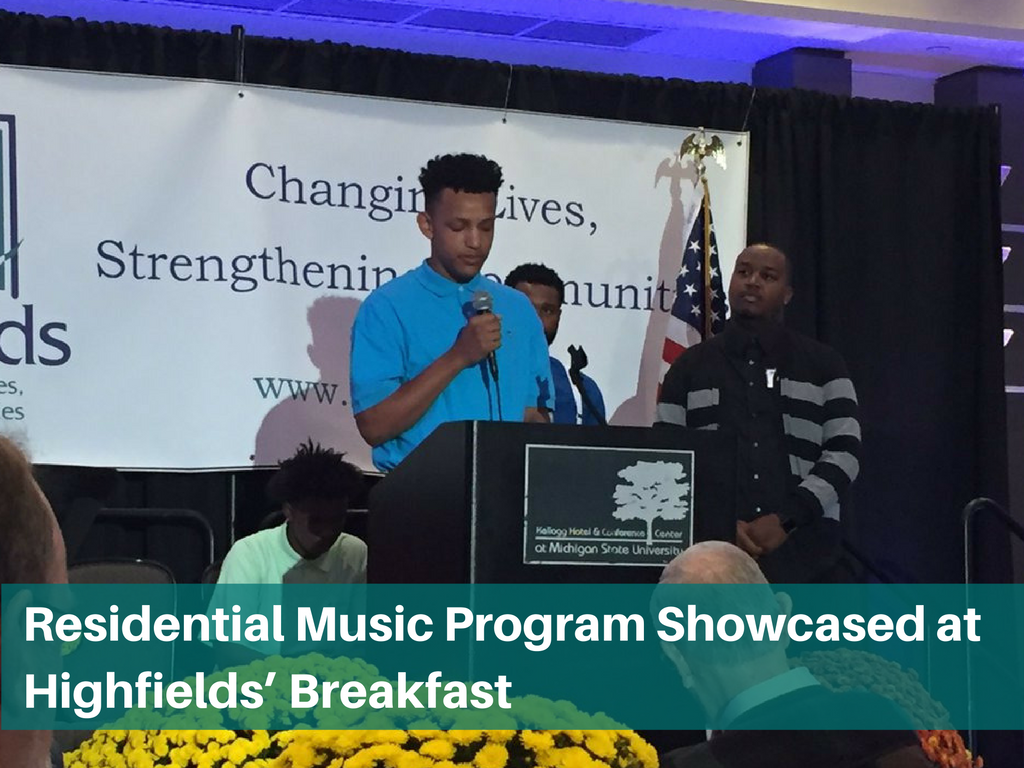 Residential student Marcus performed an original spoken word poem titled “The Struggle” at Highfields’ Strengthening Families Breakfast on October 27th. He is one of the many students involved in Highfields’ music and arts program.

Thanks to a grant from the James and Kimberly Currie Foundation, Highfields has a new recording studio on campus, which includes a laptop, headphones, speakers, and a microphone to record songs. The majority of the students are excited about the opportunity to use the music studio.

Highfields’ Residential Supervisor Russell Davis IV oversees the music program. He worked with Marcus while he was writing “The Struggle.”

“It was eye-opening for me to hear about his past experiences,” said Russell. “I think writing about it was very therapeutic for him.”

Marcus wrote about difficult issues from his past, like poverty, low self-esteem, and violence.

“I was nervous at first, but I also was excited to get the chance to perform,” said Marcus. “It was my first time performing in front of a crowd that large. I just tried to think positively.”

Marcus performed his poem and many of the people in the audience were impressed with not only his talent, but also the strength it took to open up.

“I thought he did a really great job,” said Russell. “I think the audience could tell that everything he was saying was from the heart.”

Highfields’ music program continues to inspire students to express themselves. It helps students relate to their peers and counselors.

Marcus is grateful for the opportunity to perform and show people that the music program is beneficial to Highfields’ students.

“I like the music program a lot,” said Marcus. “It helps relieve stress and its fun. I wish we could do it more.”

Click here to watch the video for “When I Look Back” a similar song which was written and performed by Highfields’ students in the music studio.