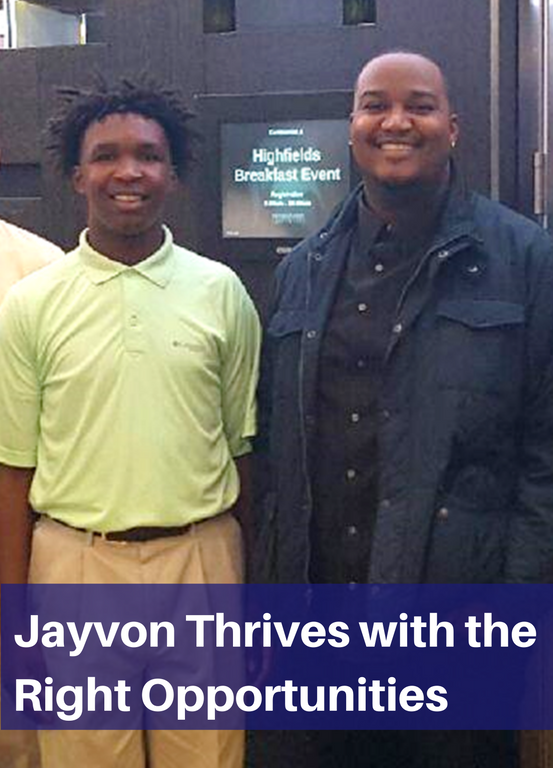 Jayvon struggled in his life before coming to Highfields. He admits he hung out with the wrong crowd and was pressured into shoplifting. He had trouble following the laws of probation and was sent to a juvenile detention center. He went back and forth between different detention centers before the Judge referred him to Highfields.

“I expected a lot less from Highfields to be honest,” said Jayvon. “All I had known was juvenile detention centers where there are a lot less privileges and you barely get to see the outside world.”

Jayvon arrived at Highfields in August. He was immediately impressed at the opportunities he had at Highfields. He joined support groups which helped him change his way of thinking. His favorite group session on campus is called Mutual Support.

“Mutual Support is based on openness and trust in the group,” he said. “You talk about problems that you have in your community, and then get feedback from your peers and the staff about how to handle it.”

In addition to group therapy sessions, Jayvon also appreciates the opportunity to work on campus.

“I don’t miss my chance to do work sessions,” he said. “I’m in the Maintenance group and I started working in the kitchen recently.”

Jayvon helps Head Cook Michelle Briston prepare food and stock items in the kitchen. He already created a resume with his experience and believes it will help him get a job when he leaves.

Jayvon says his mindset has completely changed since he first came to Highfields. He credits the supportive staff for motivating him to make better choices.

“I learned that I’m capable of a lot more, and I thank the staff for that because they expect more of me,” said Jayvon. “They are always leading me in a positive direction.”

Jayvon plans on attending community college and hopes to transfer to a university. He has been learning about law recently and wants to be a paralegal.

“Highfields has changed my life because I view things differently now,” he said. “I still have minor struggles, but overall I know I’m capable of exceeding expectations.”