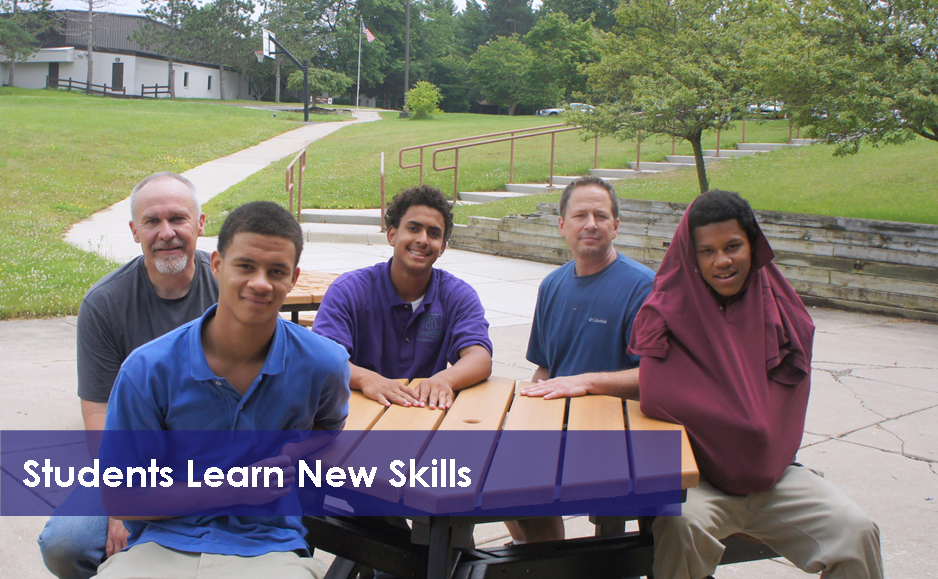 One of the first things Dontrell noticed when he arrived at Highfields’ Onondaga Campus for the Phoenix program was the facilities team. There were three men who would fix everything around campus. They seemed so knowledgeable – like his dad.

When Dontrell was a kid, his dad built a house. He asked Dontrell to help and, even though Dontrell thought a house would be too hard to build, once he started to help, he realized he was having fun.

“I used to think it was boring and too much work,” Dontrell said. “But then he showed me how to do it and I realized he knew what he was doing.”

So, when he saw the facilities team at Highfields, he was intrigued. He wanted to learn how they do what they do.

At the same time, Highfields’ Residential Treatment staff knew that if they taught their students some life and work skills, they’d be better prepared to be successful in their lives. They created the Live Learning Laboratory – a career building program where the students can earn money while learning various skills by working around campus.

“This gives them an opportunity [to have a reference] if one of these young men pursues a job,” Dwayne Smith, the direct services supervisor for Highfields’ Residential Treatment Program, said. “It [also] teaches them a lot of pro-social skills. It teaches them about frustration and how to cope with it, and [how to accept] feedback from staff and peers.”

The program started last winter with bringing some of the kids into the kitchen to help out. As they learned more skills and became more confident, they began to take on larger tasks. Now, the students serve breakfast two to three times a week to their peers as well as staff.

“We made it more inclusive with the boys and gave them ownership,” said Dwayne. “It gave them some confidence and we let them make some decisions.”

As they became more experienced, the kids started to choose what they would serve for breakfast, then figure out how to make their choices happen. Dwayne and the other residential staff could see that the students were beginning to gain confidence and better social skills. They were displaying leadership, not only when they were working, but when they were with their peers. And the older students who were working started to become mentors to some of the younger students.

The staff decided to expand the program to include facilities. This would give the students an opportunity to learn more skills – the kind Dontrell was interested in. They decided that every Tuesday and Thursday afternoon, some of the students would meet with the facilities team to help out.

“It’s fun to see them enthusiastic about something and working together,” said Butch Dashner, one of Highfields’ facilities workers. “When they complete the task, they’re proud of themselves because they’ve done something. They’ve built something.”

Butch has been working at Highfields for two years. In the past, students have helped out with a few projects, but having a regular schedule will help the students learn more skills. They have been able to complete jobs like improving the decks on the cabins on campus and building new tables for the patio.

“This group of guys can leave here with some life skills,” he said. “Both the physical skills, like being able to do the work that could potentially get them a job, but also with working together and understanding they have to work with others to accomplish goals.”

Dontrell sees the value of learning from Butch and the other facilities team, too. He says he wants to own his own construction business one day.

“While I’m here, I’m going to keep going to the Live Learning Laboratory to learn more,” he said. “If I learn a lot and study, I can take it somewhere… Butch and Ben do a lot to teach us. They really helped a lot and I think it’s going to help a lot of kids in the future.”